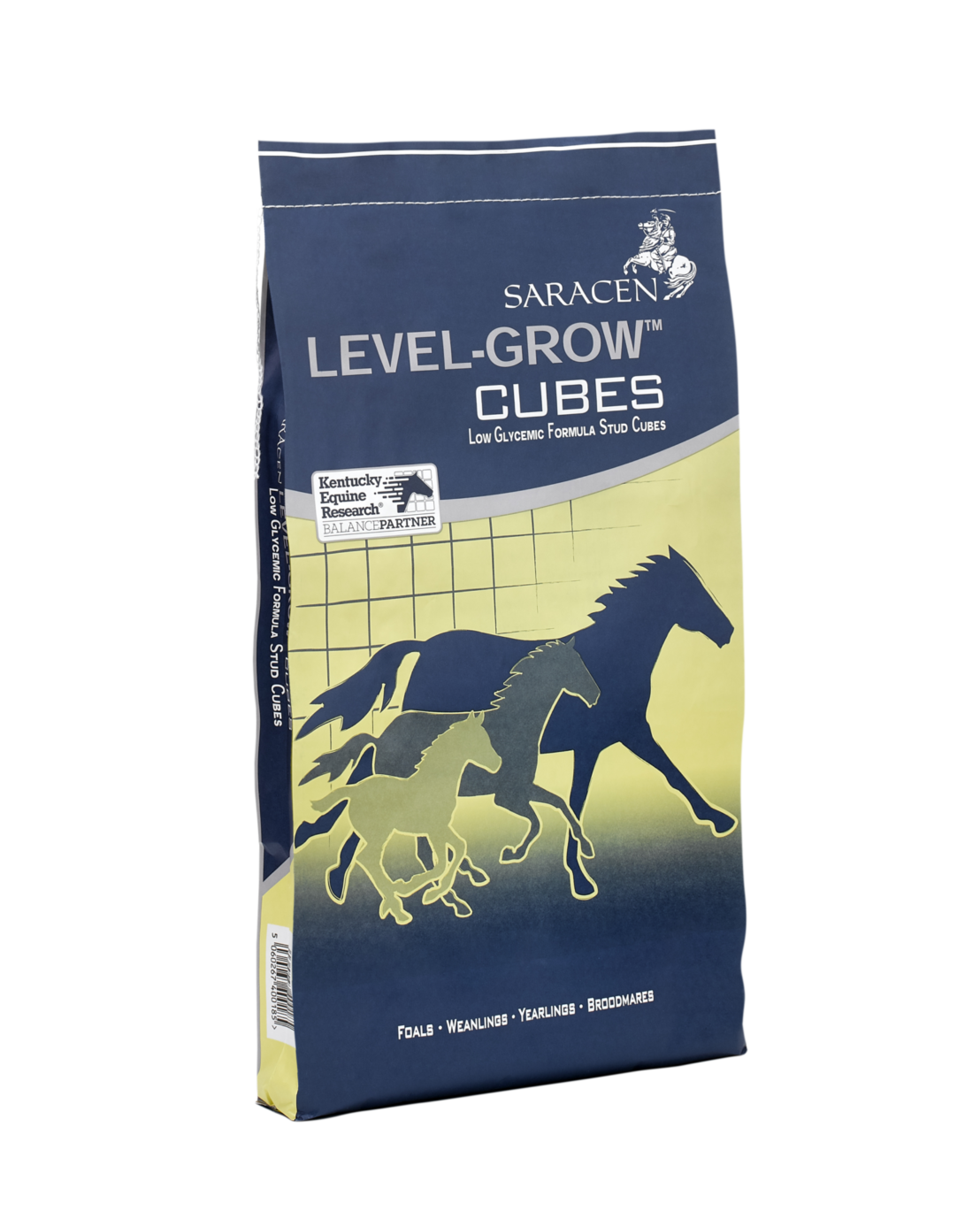 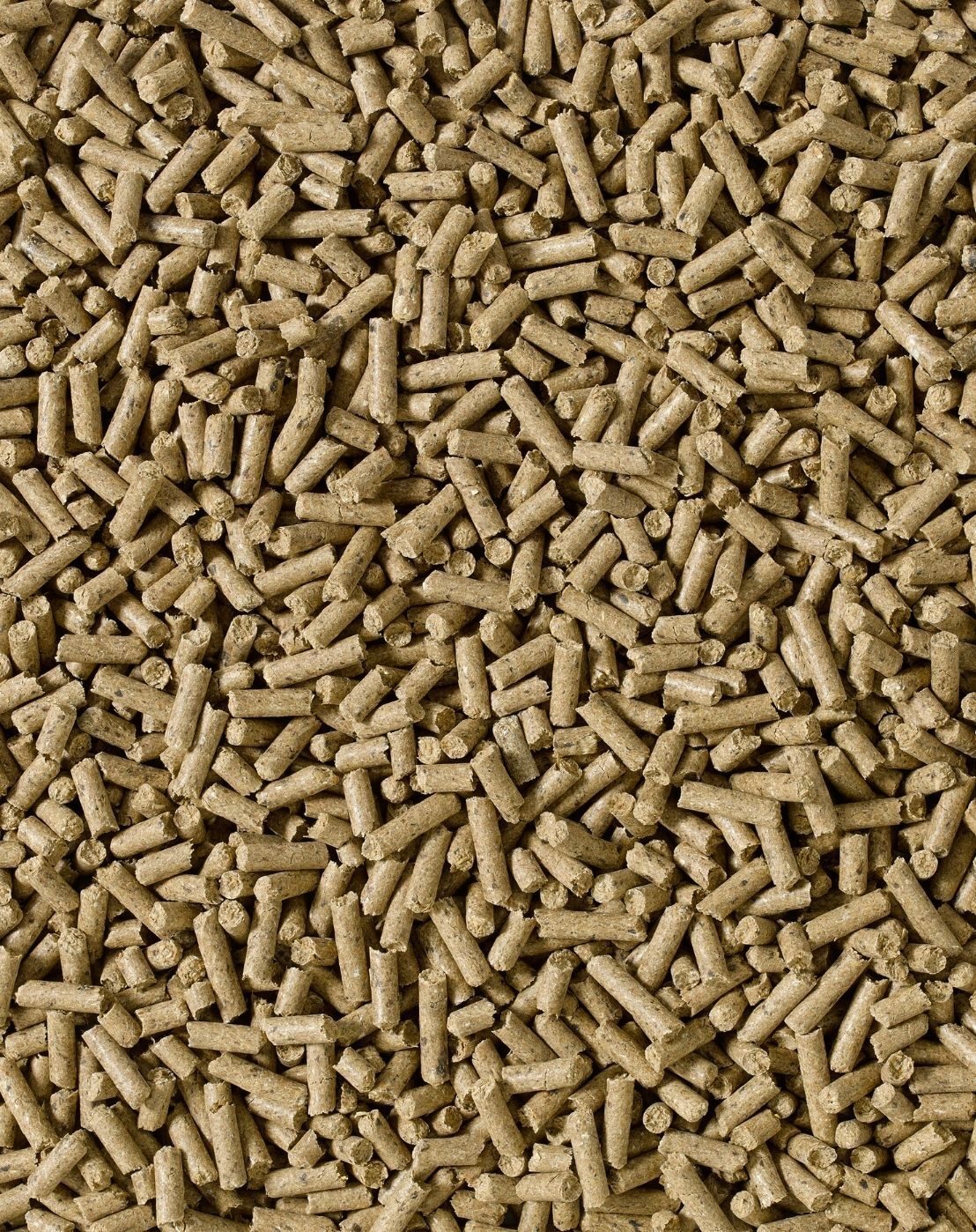 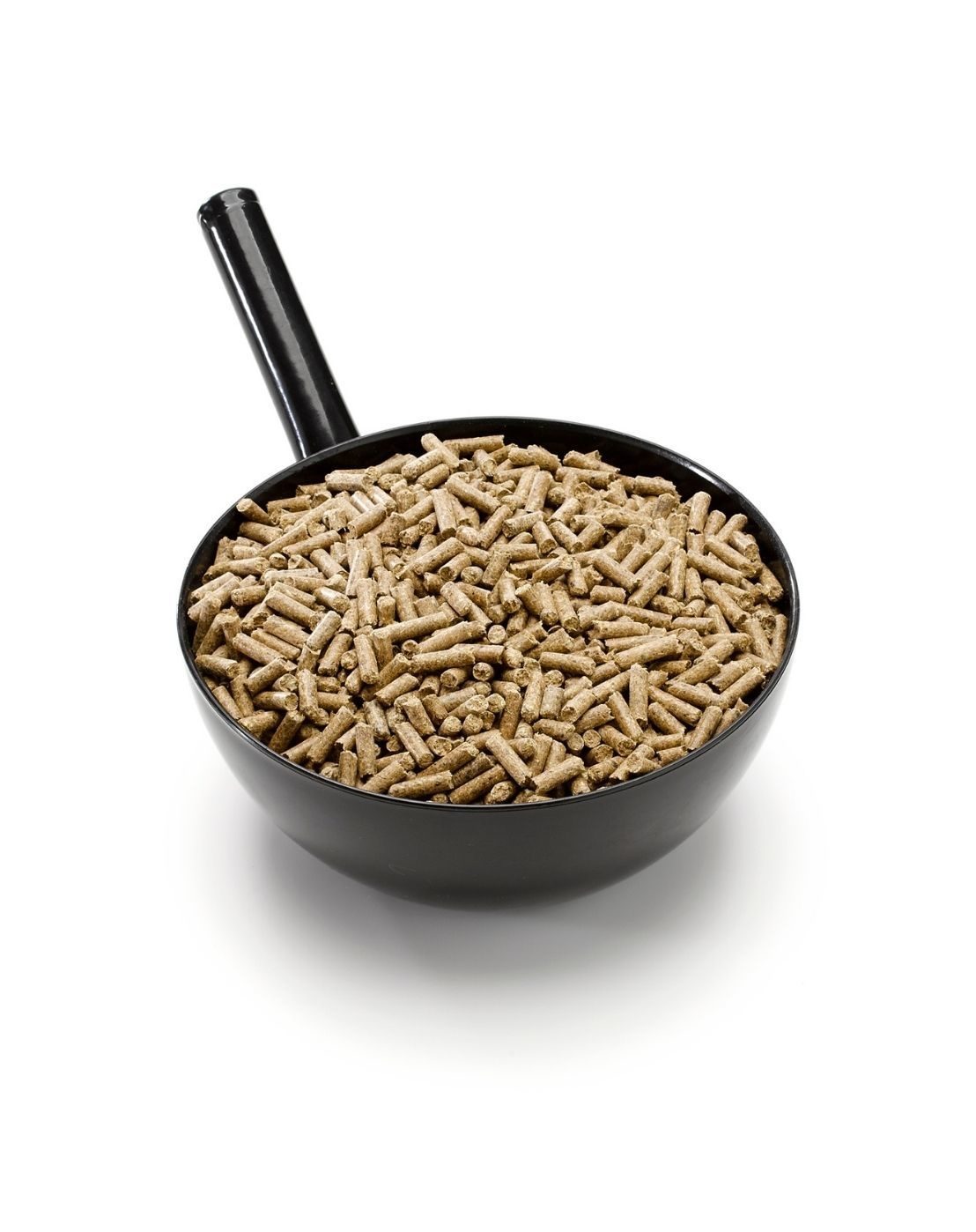 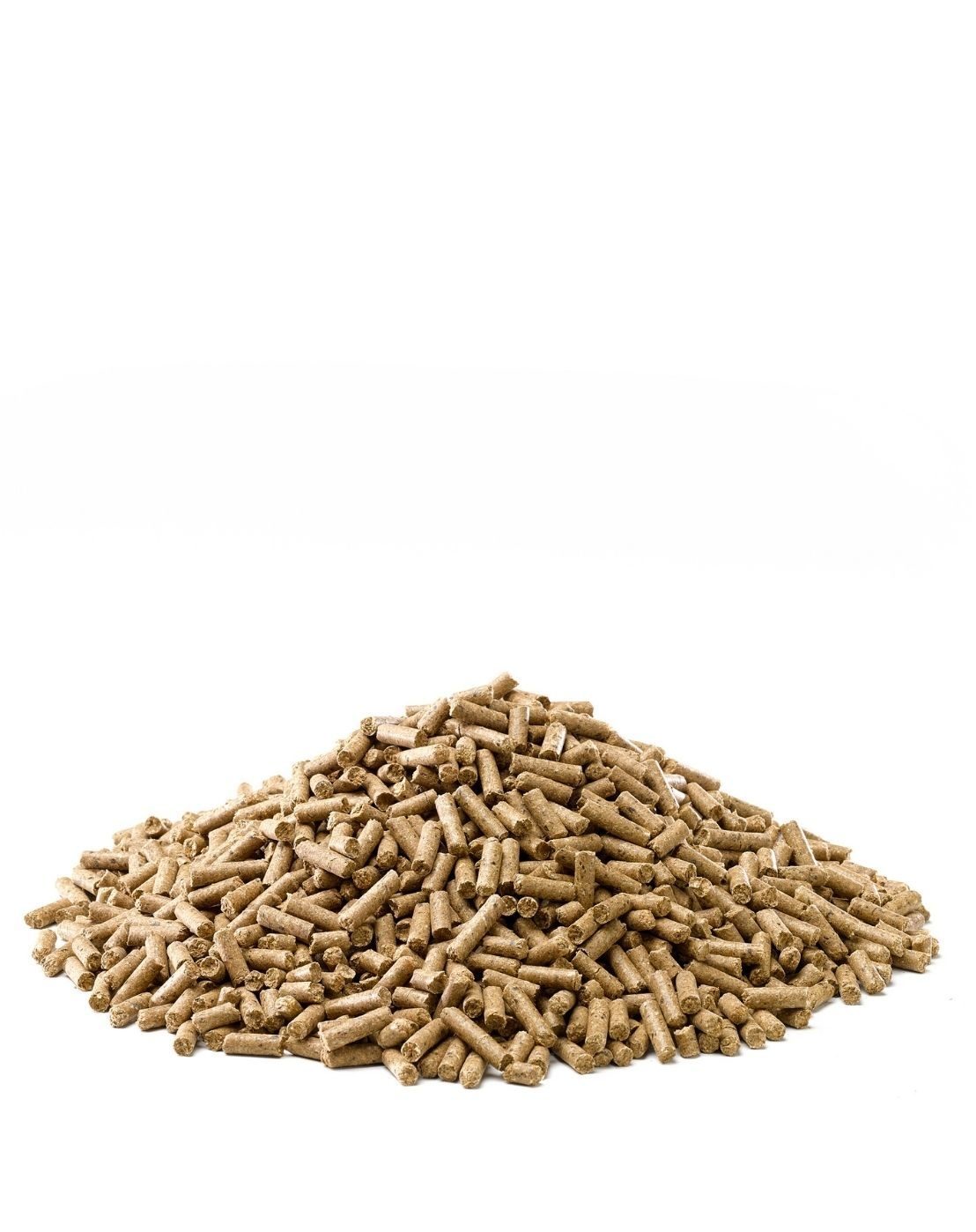 A STUD CUBE WITH A LOW GLYCEMIC FORMULA

Research studies have shown a relationship between the glycemic nature of feed and the incidence of skeletal disorders, such as osteochondritis dissecans (OCD) in young horses. High-glycemic feeds are those that produce a large blood glucose response post feeding, such as cereal grains and molasses. It appears that the normal bone formation processes in young horses are being disrupted by the elevated blood insulin concentrations post-feeding following the consumption of a diet rich in starch and sugars.

Due to smaller pastures and higher athletic expectations, today’s young thoroughbreds are often fed concentrate feeds that are high in starch and sugars. It is not the glucose by itself that causes the potential problems, but the resulting insulin that may affect chondrocyte maturation, leading to altered matrix metabolism and faulty mineralisation of bone. OCD lesions occur on the articular cartilage, which is the cartilage at the end of the bones that protects the joints. The skeleton starts as cartilage, so if there is a problem in the maturation of that cartilage, it can set the stage for lesions to develop. Not all young horses are affected, but some are more sensitive to high levels of glucose and insulin than others. In a study carried out by Kentucky Equine Research in 2001, a high glucose and insulin response to a concentrate meal was associated with an increased incidence of OCD.

Glycemic responses measured in the weanlings in this study were highly correlated with the glycemic index of the feed, but the bodyweight and condition of the weanling and the mare were also considered to be possible factors. Based on those results, it would be prudent to feed foals concentrates that only produce a low-glycemic response 2-4 hours after eating.

There are thought to be four basic causes of OCD, and affected horses usually have a combination of these:

Saracen Level Grow uses carefully selected ingredients like alfalfa, soya hulls and sugar beet (‘super-fibres’) that produce only a minimal glycemic response following digestion. By using this breakthrough in research, high levels of soluble carbohydrates have been replaced by fats and ‘super-fibres’ as alternative energy sources, and consequently, post weaning, Level-Grow™ would be the sole source of concentrate feed given to weanlings to carry them through to their yearling year until growth rates start to level off.

As the glycemic response of horses can be affected by the way their feed is formulated, using oil and fibre for energy rather than starch and sugar makes Level-Grow™ a ‘softer’, more forgiving feed. Backward foals can cope with the feed without compromising an immature skeleton, and mares that tend to carry too much condition during gestation respond well if they are maintained on Level-Grow™. The higher fibre level suits a larger mare that is inclined to get too heavy throughout her pregnancy, making it easier to control her bodyweight, particularly approaching foaling. The lower cereal and higher fibre levels mean that this product can be useful for yearling being prepared for sale if they don’t need too much conditioning or muscling up – it helps to keep some fillies looking more ‘feminine’ and slows down the conditioning on some colts that could get too ‘bulky’.

Stamm 30® is included in the Level-Grow™ formulations for nutrient continuity, so they contain the new ingredients called BMC® (Buffered Mineral Complex) which are research proven to support digestive health and hindgut stability by maintaining the correct pH for optimal efficiency of the gastrointestinal tract. Recent research studies conducted by KER have demonstrated the positive effects that BMC® has on bone density and the buffering capacity of the stomach and hindgut. The new calcium source in BMC® can maximise bone density, and subsequent skeletal strength and maintenance.

The feeding rates are offered as a guideline. If you would like to discuss your horse's individual requirements please contact a member of our Nutrition Team on 01622 718487 or call the Thoroughbred Office on 01488 73456. 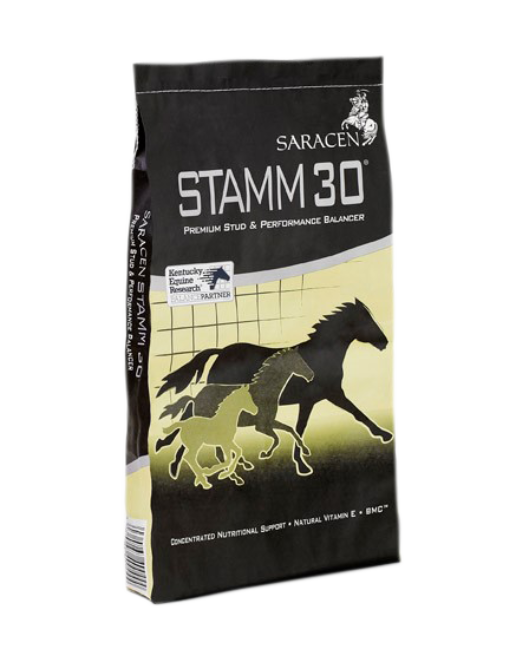 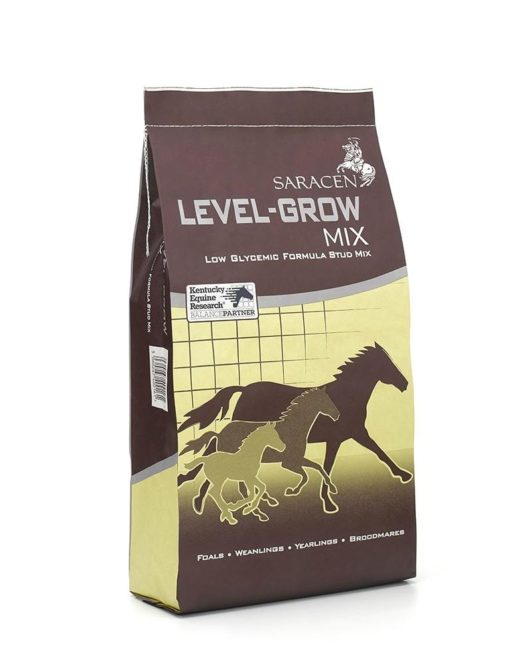 Formulated to provide a low glycaemic response after feeding which helps to maintain normal skeletal development in weanlings and yearlings up to three years old. The mix is based on highly digestible” Super-Fibres” and oil to provide a balanced energy source to support daily weight gain and steady growth rates, as well as supporting manageable behaviour in young horses
More about this product