With only the slightest of margins at the top of the leader board the Quest Teams started day two full of determination knowing that podium positions were all to ride for.

Delivering a full day of dressage, the eighteen teams showcased a shining example of team spirit with rapturous applauds going up when team members finished their tests, and scores were revealed. 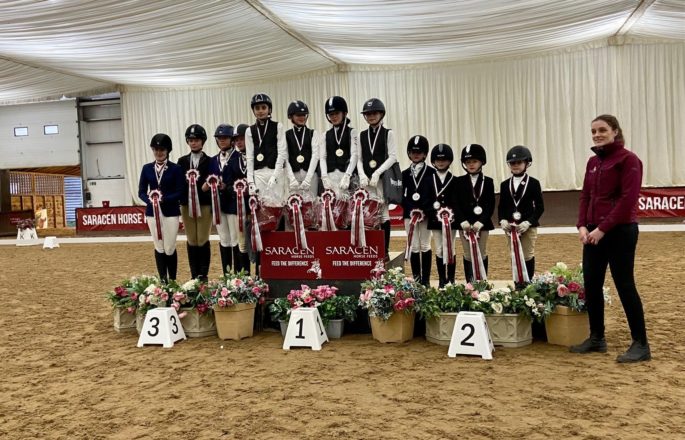 Moving up the leader board from their overnight position WKD Rascals held their nerve throughout the competition proving unbeatable to take the title of Under 21 Saracen BD Team Quest Champions. With well-executed tests securing the scores they needed, they finished comfortably ahead of the field. The Kent based team consisting of Rebecca Aston (13) riding Celton Ajax, Jemina Brown (14) with Lacy Milan, Lennon Healy (14) and Jamaj, and the fourth member Lucinda Jenkins-Price (13) and Birchlands Peter (or simply Peter to his friends) have been competing together for two years before being crowned triumphant.

Mastering the prize giving, the WKD Rascals expertly piloted their rides to the applause of spectators, leaving an extra special memory to Rebecca Aston whose ride will now be retired. Going out on a high the 20-year-old Celton Ajax’s career has seen him through Pony Club, Area Festivals and now victorious as a Team Quest Champion.

Proving unbeatable, team member Jemima Brown was crowned both individual U21 My Quester Champion as well as playing an instrumental part of the WKD Rascals Team Quest victory. Lead rein pony to dressage Champion, Jemima has successfully schooled Milan from being a first ridden lead rein show pony to producing tests worthy of over 72%, awarded on day two. Affectionately known as Rascals by name but not by nature, the team manager Emma Kinsley couldn’t be prouder of each rider who has worked so hard to achieve this accolade.

With just one point separating second and third positions, Alvechurch Allstars from Worcestershire took to the podium in third place. Double celebrations as this also marks the return to form of team horse Dorothea following a long spell of recovery from an accident resulting in a back injury. 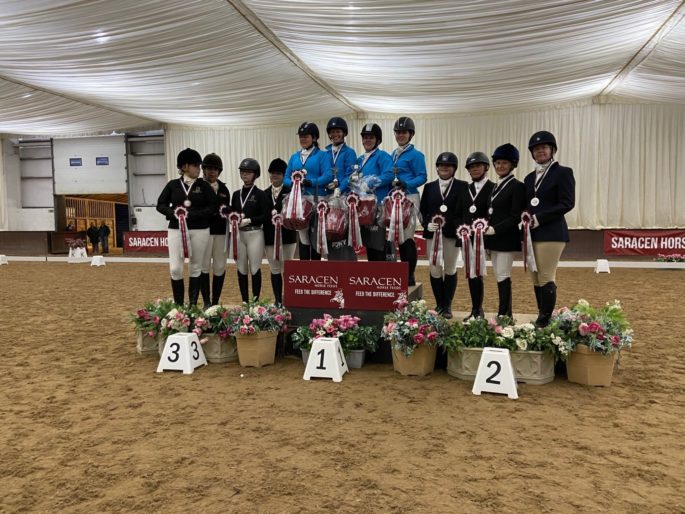 Team highlights included the BFG (big friendly giant) Cador and Adele Barlow delivering the highest score of the day with an impressive 74.93% to ensure their overnight lead. The BFG is renowned for not only his size but also his adorable gentleman like character, which makes him a firm favourite not only on the yard but also in the arena. Enjoying the team spirit under the watchful eye of team trainer Mandy Snowden, the riders have competed in Team Quest over the past 4 years with hard work, dedication, and a huge dose of fun before delivering the coveted title.

The Jenkinsons Gems had to wait until their last rider Nikki Van Geffen on Kingstown Barney had ridden the very last test of the day before finding out whether it was enough to secure their place on the podium. Setting the bar high the Reserve Champion team consisted of Lynden Barrow riding 5-year-old Fleur C, Cindy Harrington with 4-year-old Perriland Compo, Patricia Ray and the more experienced 15-year-old Brynithon Summer Magic, plus Nikki Van Geffen on 18-year-old Kingstown Barney. The open team also enjoyed celebrating the success of their J Little Gem Team who rode to 5th pace in the Under 21 section.

Also flying the flag for the southern region was the DDRC Divas (Dartford & District Riding Club) with consistent scores in the late 60s and improving throughout the weekend. The team of Nicola Barnes and Jade Philbin, both competing on Harley IV, plus Susanne and Lois Seymour, with Diorissimo, the successful riders secured third place.

As the inaugural Saracen BD Quest comes to a close and our Champions for 2021 are applauded, Saracen Horse Feeds would like to extend a huge congratulations to all of the riders who took part throughout the series gaining points from across the country to qualifying for the Championship Finals. We have thoroughly enjoyed supporting your journeys and meeting so many of you and your horses at Bury Farm, it was a pleasure and privilege to offer feed advice and product information to you all.

Back to latest news